[Chorus: King Green]
This right here for the number one
Number ones here with your number one
You ain’t number one, just another one
Now everybody sayin’ that they number one

Ring the alarm, the caterpillar keeps firing
Ohh, we in the war, where butterflies keep dyin’ (ahh)

I’m a product of Parker Lewis and Kubiak
If I didn’t do this, where in the fuck would you be at?
See there’s a difference between us, what I spit hit arenas
You a drip from my penis, I eat lions and sip hyenas
You number one when it come to slaughtering mics
I’m tryna be number one in my son and daughter life
Uhh, all you niggas my little rapper babies
Y’all my children, y’all bit my shit and contracted rabies
Don’t you grade me next to these rappers, baby, that’s degrading
My style got so many different facets
I switch into so many different passions
I’m skippin’ class to be fascinatin’
My pen is like Big Ben, this shit’s just a classic waiting
Your favorite rapper come at me, I just decapitate him
I hate congratulating these has-beens who had their highs
These rappers only won their matches because they strategize
I bring Attica to these patterns, and here’s my battle cry

Ring the alarm, the caterpillar is firing
Ohh, we in the war, where butterflies keep dyin’ (ahh)

Hold up, wait a minute
Guess what I’ma never do? Show so much respect to you
That I feel like we’re friends, so now we no longer competitors
That could be the death of you
Never let someone who’s not as smart as you
Gas you up and tell you somethin’ you never knew
Always stay professional, you always gon’ make revenue
Don’t let people next to you that don’t want the best for you
It’s completely normal to hold on to a regret or two
I do what I wanna do, they do what I let them do
Everything these niggas be sayin’ is a fuckin’ lie
It’s nothing I can say to you that is realer
Remember when you praisin’ the butterfly
Don’t you ever disrespect the fuckin’ caterpillar

You’re looking at Atilla, the psychopathic killer, the caterpillar
Don’t tell me when I’m supposed to rap until, uh
Especially when your favorite rapper ain’t even half as ill
A savage still, the track’s a banana peel, attack at a silver-back gorilla
You’re havin’ a little trouble fathomin’ this is actually happenin’
Like Anderson Silva back when he snapped his shin in half
And then had the shit hangin’ by a flap of skin
After he tried to plant the shit back on the mat again
Pad to pen I’m batty like eyelids when they’re blinkin’ a lot
You copy me, but you’re not
You can’t be butterflies, my offsprings are just moths
I see that thing I’ma squash it and rip the wings of it off
So ring the alarm, pull the extinguishers off of the wall
Set the sprinklers off like Jada Pinkett and Queen Latifah
‘Till the shingles come off the roof we’ll shout at the ceiling
Slaughterhouse in the building, middle fingers aloft
Say what I think when I rhyme, in ink-pen I talk
And the language I speak is my mind
Kingpin and Penguin combined
Spit like it’s King of the Dot
A singular thought I think of will help you distinguish apart
The frauds from the cream of the crop
(Wait a minute) Hold up like a flashcard
Damn dawg, is that copyin’ or payin’ homage?
It’s sad because dad taught you to rap as a damn toddler
My dad is your grandfather, I’ll have to re-hatch on you
Come back as black wasp, half yellow jacket, you can’t swat a
Sasquatch dancing on top of an ant trample it and stomp it
Smash it and stand on it, dammit, I can’t stop it
The rap is a vag’ and I’m goin’ in like a tampon in this bitch
It’s a manslaughter
Stampin’ out grasshoppers, you can’t be no Rap Gods
In fact you’re exact opposites, you make a wack song
And can’t hold a candle but even Daniel-son whacks off
You jack-offs need to come to grips like a hand job
The boom bap is coming back with an axe to mumble rap
Lumberjack with a hacksaw
Number one, but my pencils are number twos
‘Cause that’s all I dos with ’em, poop is my pseudonym
On the john like a prostitute when I’m droppin’ a deuce
And when I’m producing them lyrical bowel movements
These beats are like my saloons
‘Cause these bars always got my stools in ’em
And I don’t need Metamucil to loosen ’em
Bitch, shit is real like I pooped Jerusalem
I’m ’bout to go spin a cocoon
Then I’m cuttin’ you from your mother’s womb
Then I’m flushin’ you! 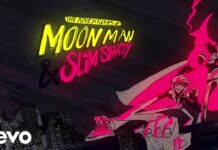 Eminem – Music To Be Murdered By. Il nuovo album