Testo I Got a Story to Tell Notorious BIG

Who y’all talkin’ to, man?
Uh
Check it out, check it out
This, here, goes out to all the niggas that be fuckin’ mad bitches
In other niggas cribs
Thinkin’ shit is sweet
Nigga creep up on your ass, hahaha
Live niggas respect it—check it

I kick flows for ya, kick down doors for ya
Even left all my motherfuckin’ hoes for ya
Niggas think Frankie pussy-whipped, nigga, picture that—with a Kodak, Insta-ma-tac
We don’t get down like that, lay my game down quite flat
Sweetness, where you parked at?
Petiteness but that ass fat
She got a body make a nigga wanna eat that, I’m fuckin’ with you
The bitch official, doe, dick harder than a missile, yo
Try to hit, if she trippin’, disappearin’ like Arsenio
Yo, the bitch push a double-oh
With the five in front, probably a connivin’ stunt
Y’all drive in front, I’m a peel with her
Find the deal with her, she fuck around and steal, huh?
Then we all get laced
Television’s, Versace heaven, when I’m up in ’em
The shit she kicked, all the shit’s legit
She get dick from a player off the New York Knicks
Nigga tricked ridiculous, the shit was plush
She’s stressin’ me to fuck, like she was in a rush
We fucked in his bed, quite dangerous
I’m in his ass while he playin’ ‘gainst the Utah Jazz
My 112, CD blast, I was past
She came twice I came last, roll the grass
She giggle, sayin’ “I’m smokin’ on home-grown”
Then I heard the moan, “honey I’m home!”
Yep, tote chrome for situations like this
I’m up in his broad I know he won’t like this
Now I’m like, “Bitch, you better talk to him
Before this fifth put a spark to him
Fuck around shit get dark to him, put a part through him
Lose a major part to him, arm, leg.”
She beggin’ me to stop but this cat gettin’ closer
Gettin’ hot like a toaster, I cocks the toast, uhh
Before my eyes could blink
She screams out, “Honey bring me up somethin’ to drink!”
He go back downstairs more time to think
Her brain racin, she’s tellin’ me to stay patient
She don’t know I’m, cool as a fan
Gat in hand, I don’t wanna blast her man
But I can and I will though, I probably chill though
Even though situation lookin’ kinda ill yo
It came to me like a song I wrote
Told the bitch, “Gimme your scarf, pillowcase and rope.”
Got dressed quick, tied the scarf around my face
Roped the bitch up, gagged her mouth with the pillowcase
Play the cut, nigga comin’ off some love potion shit
Flash the heat on ’em, he stood emotionless
Dropped the glass screamin, “Don’t blast here’s the stash
A hundred cash just don’t shoot my ass, please!”
Nigga pullin’ mad Gs out the floor
Put stacks in a Prada knapsack, hit the door
Grab the keys to the five, call my niggas on the cell
“Bring some weed I got a story to tell, uhh”

Yo man, y’all niggas ain’t gonna believe what the fuck happened to me. Remember that bitch I left the club with man? Yo, freaky yo. I’m up in this bitch playa this bitch fuckin’ run them ol’ Knick ass niggas and shit. I’m up in the spot though. One of them six-five niggas, I don’t know. Anyway I’m up in the motherfuckin’ spot. So boom I’m up in the pussy, whatever whatever. I sparks up some lah, Pop Duke creeps up in on some, must have been rained out or something because he’s in the spot. Had me scared, had me scared, I was shook, Daddy—but I forget I had my Roscoe on me. Always. You know how we do. So anyway the nigga comes up the stairs, he creepin’ up the steps, the bitch all shook she sends the nigga back downstairs to get some drinks and shit. She gettin’ mad nervous, I said fuck that man! I’m the nigga, you know how we do it, nigga, ransom note style put the scarf around my motherfuckin’ face. Gagged that bitch up, played the kizzack. Soon this nigga comes up in the spot, flash the Desert in his face he drops the glass. Looked like the nigga pissed on his-self or somethin, word to mother! Ahh fuck it. This nigga runs dead to the floor, peels up the carpet, start givin’ me mad papers, mad papers. (I told you that bitch was a shiesty bitch cuz! Word to mother I used to fuck her cousin’ but you ain’t know that! You wouldn’t know that shit. Really though.) I threw all that motherfuckin’ money up in the Prada knapsack. Two words, I’m gone! (No doubt, no doubt… no doubt!) Yo nigga got some lye, y’all got some lye? *conversation fades out*

Testo I Got a Story to Tell Notorious BIG 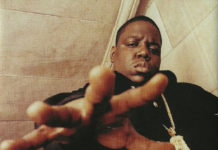 The Notorious BIG – Can I Get Witcha (Testo) feat. Lil’ Cease

The Notorious BIG – If I Should Die Before I Wake (Testo) feat. Beanie Sigel, Ice Cube & Black Rob